Religion is a very important part of the Zulu way of life, particularly when it comes to their ancestors. Their religious belief and practices have played (and continue to play) a role in their traditional ceremonies, warfare, in the different life phases of people and in their social and economic well-being. 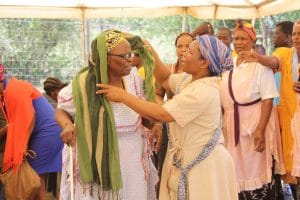 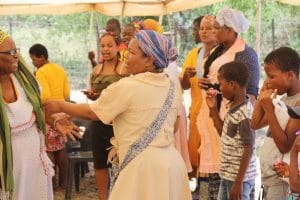 The Zulu community believes in an all-powerful, supreme and supernatural being called Unkulunkulu (or God in English) who is said to be the “greatest of the great”. He is the one who is the source of all power and also, he who owns all the power. Furthermore, he is the source of knowledge and wisdom. The Zulu religious understanding of God differs slightly from the Christian understanding of God, how he appeared, what he created as and the connections people have with him. He is seen as the first man and ancestor.  He is not at all directly worshiped by the people because he is considered to be above or “too good” to be interacting in daily human feelings and events. The Zulu community feels they are not worthy enough to be interacting with him. It is because of this view of Unkulunkulu that ancestors play a big role in the Zulu religion.

Unkulunkulu, according to Zulu storytelling, he was created in Umhlanga, a big bed of reeds, before he descended on Earth. Once he arrived, he created all the animals, the water, the mountain, the moon, the sun, and humans. He created everything as we know it. It is, however, unclear how he created everything. He is described as being within every creation and he is everywhere. It is said that after he created everything, he sent a message with a chameleon (unwabu) to humanity saying that they would live forever. However, there was a different message sent through a lizard (intulo) saying that all humans would die. The chameleon was very slow and instead of arriving with the original message first, the lizard arrived first. This, according to Zulu beliefs, is why humanity does not live forever on earth but rather they live forever through being ancestors. In some stories about this great being, he is characterized as the source of the social order because he gave each human being their ancestors. He decided how these ancestors should be approached and what role they should play in the lives of people.

Unkulunkulu is and will always be the highest being, however, the Zulu community also believes in other gods or goddesses or beings with divine status, nature or quality and who exist along with Unkulunkulu. These are associated with animals or natural phenomena.

Ancestor worship is an important part of the Zulu religion. Ancestors (amadlozi or abaphansi) are believed to live in the spirit world with Unkulunkulu and are the connection between him and the living. Ancestors come to the people in many ways such as in the form of dreams or sicknesses or even as animals like snakes.  The term amadlozi comes from the word dloza which means “to care for, keep an eye on”. The term abaphansi comes from the belief carried by Zulu people that the spirit world exists below (phansi), therefore ancestors are “those of the below”. Ancestors are addressed by the diviners (such as sangomas) as makhosi, which comes from the term inkhosi meaning chief, or they address them as ubhukhosi which means authority, glory, power.

An interesting fact is that death is a celebrated event for the Zulu people, mourning a person’s death is discouraged and often looked down upon. This is because to them, death does not mark the end of a person’s life, but a transition into ancestry. They believe that people have a body (umzimba), a heart (inhliziyo), a mind (ingqondo), a shadow/personality (izithunzi) and most importantly a separate spirit or soul (idlozi) – not all of this is taken away when a person dies. When death happens, the personality/shadow separates from the body and becomes an ancestral spirit. This is why when a person dies, a Zulu person would say “useye koyise-mkhulu” (she or he has gone to be with the ancestors). According to cultural beliefs, the transition into an ancestral spirit can only happen when the shadow/personality is brought back home through the ukubuyisa ceremony. The ceremony is aimed at integrating the personality/shadow into the community of ancestors. Before the ceremony happens, the personality/shadow wanders around within the world.

The powers of ancestors are truly great, they are believed to have the power to control the forces of nature. When good things are happening, it is a sign that the ancestors are with them as individuals and as a community. However, when things are going bad then it is a sign the ancestors are angry and are turning away from them. This is also why the Zulu people look to their ancestors as a source of guidance and a connection to Unkulunkulu (similar to the role of guardian angels in western Christianity).

Zulu people connect to their ancestors through a diviner known as a sangoma. A sangoma is “called” by the ancestors through an initiation illness (ukuthwasa). The initiation is a healing process that creates the relationship between the sangoma and the ancestors.  After the process, the sangoma undergoes very strict training and learns different skills from the older sangomas. They learn skills such as how to use herbs for healing, how to connect better with their ancestors and how to interpret things like dreams. Sangoma are often consulted to find out what plans the ancestors may have of the community or the individual, and more importantly why the ancestors may be angry (when misfortunes such as death and illnesses continue happening). Through a divination process, the sangoma, who is usually a woman, will be able to reach the ancestors. The sangoma will either give them guidance based on what the ancestors say to them or they may even recommend a sacrificial offering should be performed in order for their bad fortunes to turn into good ones. They may also give the person medication to cure the misfortune. There is a whole process that the sangoma engages with in order to help the person and establish the persons' relationship with the environment (including the ancestors). First is the black medicine (mnyama) which represents darkness, danger, night and difficulties. Black medicine is used to detoxify the person before the curing process can actually take place. After this, the red medicine (bomvu) is used as a medicine that brings about transformation.  Lastly, white medicine (mhlophe) is used. White medicine is a symbol of not only strength, but also health, success, and purity. A sangoma has other roles and obligations to the community such as protecting warriors, finding lost cattle and/or sheep and directing rituals.

Zulu people make offerings and sacrifices, though slaughtering animals (like cows and goats) and making traditional beer (umqombothi) for their ancestors as a way to acknowledge them and to keep in contact with them. It allows the person or even the community to thank the ancestors for their blessings or ask them to add or remove something from their lives. There are two main types of sacrifices. The thanksgiving (ukubonga) which happens when something good happens to a person or to the community, examples of when this sacrifice happens to include: when there is an abundance of food, when there is marriage, when a birth happens, when someone is cured of their sickness, or even when boy or girl reaches puberty. The other ceremony is the scolding or ukuthetha ceremony which happens when people pass away unexpectedly or bad things keep recurring.

It is also interesting that certain types of ancestors play an important role for each person. Besides the ancestors that may be ‘given’ to them, other ones such as family members who have passed also have an influence on the person. For a man, the most important ancestors would be his father, his mother, his father’s brothers (his uncles), his paternal grandfather and his paternal grandmother. These family-related ancestors are closer to the person in spirit.

Despite the strong beliefs in their traditional religious systems, many Zulu people have been influenced by Christianity. The common denominations of Christianity are Catholicism and Protestantism. Christianity was bought to the community through American and European missionaries, and at first, it was not welcomed by the people. This has since changed as for most people ancestry and western Christianity exist side-by-side in their personal lives. An example of how they seem to co-exist is seen through how they deal with things such as misfortune or bad luck. When faced with this Zulu Christians will not only do the ancestral offerings as traditionally prescribed, but they will also do a Christian prayer. In the 20th century, many of the people became members of churches that combined the two belief systems. One of these churches is the Ibandla IamaNazaretha (commonly known as the Shembe church) which was founded in 1911. The church is very popular in rural Zulu communities. They worship through song and dance and where unique beaded accessories

Travel to KwaZulu Natal and one quickly will start experiencing Zulu Culture, from scattered Homesteads and traditional farming methods. The Zulu people are and remain a cultural people and continue to practice their customs to this day. For amazing and incredible insights in their day to day ways why not join a Zulu Cultural tour today.

Heritage Tours & Safaris was established in 2003 and has since grown into the largest privately owned safari tour operator in the area. The company offers a wide variety of day excursions and overnight safari packages into both the iSimangaliso Wetland Park and Hluhluwe-Imfolozi Park.